I was a first-time donor... 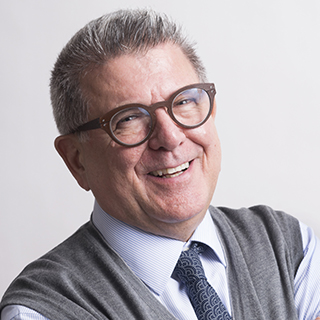 We're bringing Tom Ahern to Kansas City on July 12 to share how to grow your individual donor base using smart communication. Learn more and save your seat here.

I was a first-time donor...and loved their thank-you note! ...which means (you guessed it) I might become a second-time donor.

You care about kids! I know you do. You know why? Because your gift of $250 just came across my desk.

It's been a tough legislative session for our kids in the public school system, but you are a bright spot! Your generosity will help us continue the fight for our students.

Tom, I know you live out of state, but I want you to know how very much I appreciate your support. Public schools benefit all of us and it’s imperative that we stop the very dangerous legislation that is being forced upon our local communities by our Tennessee State Legislature.

The voucher program that just passed out of the Finance Committee fails to address the real problems in the few schools around the state that are considered “failing”.

The bill that allows teachers to be armed in their classrooms… no explanation needed.

And then there’s the proposed bill that takes decisions to approve new charter schools out of the hands of local school boards.

Our local school district is consistently improving due to our past work, empowered by volunteers and donors (just like you!). It’s important that we keep our local officials on their toes. Your financial gift will help make that happen.

Thank you, once again, Tom. Your kindness gives me the inspiration to fight another day!

What did Andy Spears (a stranger) and executive director of strongschools.org (a cause I’d never heard of, working for change in a state I do not live in) do so incredibly right?

Let’s start with the basics.

Still not quite sure what I’m getting at? Let’s try a visual instead. Here’s a word cloud of Andy’s letter: 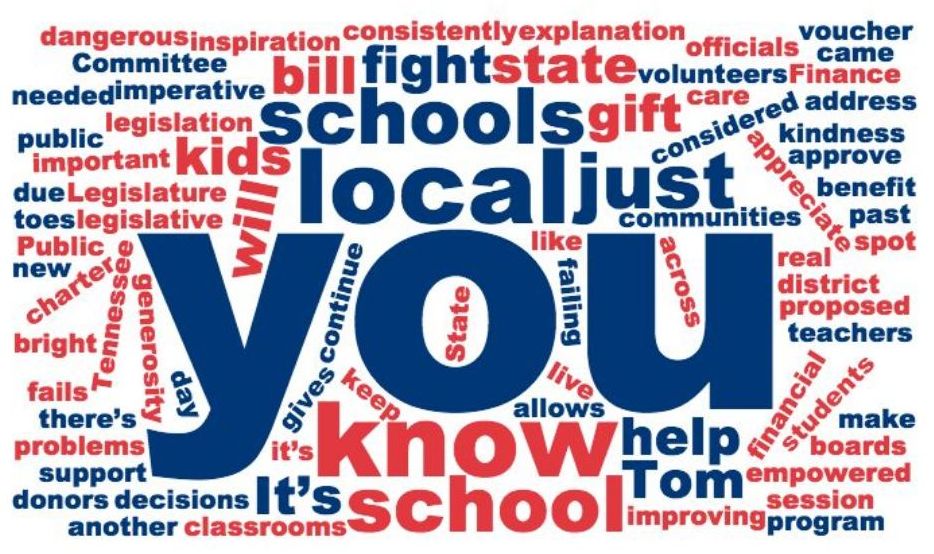 Of course, you still might wonder why would a donor who lives in Rhode Island (me) give to school reform in Tennessee (not me)? Why would Beate Sørum, my compassionate Norwegian friend and colleague, give eagerly to the issue of immigrant rights in the United States? Or why does a grassroots animal welfare charity in Bangkok, Thailand derive most of its support from donors who reside elsewhere: in Australia, New Zealand, the UK and North America … to the tune of $350,000 raised each month from Facebook alone?

And it doesn’t matter all that much where a good fight’s taking place. I’ll join any fight that I deem virtuous, that matches my values, that promises a ray or two of hope in some arena I care about … even if the fight isn’t in my own backyard. I just want to defeat some inhumane jerks, some mean-spirited policies, some Scrooge-like behaviors, somewhere … because, for one thing, many problems are systemic; they’re not specific and local. So, maybe if school reform gets solved in Tennessee (not my home state), then down the road Rhode Island (which is my adopted home state and struggles mightily, not all that successfully, with school reform) will get the benefit of lessons learned.

Give me a fight I personally consider worth winning … and I’m 99% ready to make a gift. All that will prevent me from completing that gift is inconvenience, jargon, irrelevant statistics and your organization’s likely lack of “donor love.”

Fundraising is so not about money.

Tom Ahern is considered one of North America’s leading authorities on donor communications. Each year, he delivers dozens of workshops on the techniques of (and psychology behind) effective fundraising communications. His creative work as a “message strategist” has won repeated major international awards against competitors from Boeing and Disney.
Tom works with dozens of clients nationwide including brand names like the Sierra Club and Save the Children, as well as hospitals, universities, foundations, and local charities. He is the author of four well-received books on fundraising communications. Learn more here.
Member Directory News Releases Events Calendar VolunteerLink Marketplace Job Postings Contact Us Join