Read insights from local and national leaders on topics important to the nonprofit community.

Submit a Guest Blog at the button below. 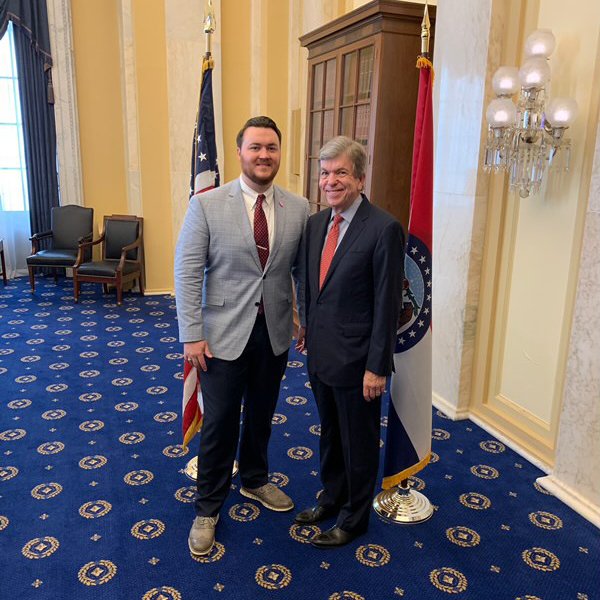 Last week, I attended The National Council of Nonprofits’ Nonprofit Lobby Day in D.C. Representing Nonprofit Connect, I advocated to Congress on behalf of the 8,997 registered 501(c)3 organizations in the Kansas City region.

Critical Meetings
The first meeting of the day was held in a conference room inside the Capitol. The original intent of the meeting was to be a morning briefing and to make introductions, but we were lucky enough to have Rep. Carolyn Maloney (D-NY, 12), author of the “Nonprofit Relief Act,” speak to us about her legislation. Rep. Maloney discussed how the bill would undo some of the oversight from the “Tax Cuts and Jobs Act” of 2017, such as the “Silo” UBIT, extending the paid leave tax credit to nonprofits, and undoing the tax on volunteer mileage reimbursement for individuals.
After this initial briefing, I began my Congressional meetings. I was able to meet with the staff of Senators Roy Blunt (MO), Josh Hawley (MO), Pat Roberts (KS), and Jerry Moran (KS), as well as the staff of Congressman Emanuel Cleaver (MO, 5) and Congresswoman Sharice Davids (KS, 3). At each of these meetings, I discussed the following:

Key Takeaways
The first issue of note is that all of the offices I spoke with were in favor of the “LIFT for Charities Act,” and were specifically surprised at the oversight that nonprofits were not included alongside businesses with the paid leave tax credit.

Because the “Nonprofit Relief Act” has not yet received an identification number, most offices had not heard of it, but were receptive to the idea. When discussing expanding charitable giving incentives, “Universal Charitable Giving Act,” I was surprised at how intentional Republicans were with this piece of the “Tax Cuts and Jobs Act.”

All of the Republican offices I visited said that they wanted to “see how this affects charitable giving” before they consider repealing this provision, and that they wanted to see the numbers from 2018 before making any decisions. The staffer with Senator Pat Roberts’s office mentioned that he had read that wealthy donors had given more to cover the loss from smaller donors who weren’t able to itemize, and that giving had evened out. The National Council of Nonprofits responded that we did not have the numbers to verify this yet, but that even if wealthy donors were giving more, most of this was going to larger organizations and smaller nonprofits were not being funded equally. Congressman Cleaver and Congresswoman Davids’s offices wanted to address the issue preemptively, but knew this was unlikely to happen.

Regarding the Census, I was surprised at the lack of pushback from the Republican offices regarding the citizenship question. I framed the argument purely around the issue of funding: nonprofits rely on the Census to get funding from the government. So if the count is wrong, the amount of funding is wrong. I also mentioned to every office that if you look at the issue of the Census from a healthcare perspective, a health system will use Census data to determine need in their area. If they do not have an accurate representation of their area, they could build a geriatric facility when really a pediatric one is needed. Additionally, I made the point that if nonprofit community partners are picking up the slack for the government to help count our communities, we are diverting precious resources away from our missions. If a citizenship question is included in the 2020 Census, we will have to work overtime to help count this segment of the population who will turn to the nonprofits they trust, rather than government offices they may be concerned to engage with.

One small takeaway regarding the Johnson Amendment I had was that Senator Hawley’s staffer had never even heard of the legislation before. As a new Senator there is a lot to learn in your first term, but I was surprised that someone who just finished campaigning had never heard of and did not have a stance on the only piece of legislation that addresses nonpartisanship for charitable nonprofits.

Final Thoughts
The greatest highlight of Nonprofit Lobby Day was the opportunity to build relationships with other nonprofit associations similar to Nonprofit Connect, who are working in other parts of the country to help their members effect change. Though our geography may be different, the struggles and successes of our organizations and our members’ organizations are shared by a common theme of striving for the greatest good for the greatest amount of people. We work every day to help our members achieve their missions through education, resources and community-building, and we advocate on behalf of our members and their missions to the elected officials who can either lift them up or stand in their way. I’m grateful to the National Council of Nonprofits for offering Nonprofit Connect a voice on Capitol Hill.